Can psilocybin really cause psi? - Part 1: Puharich in Mexico 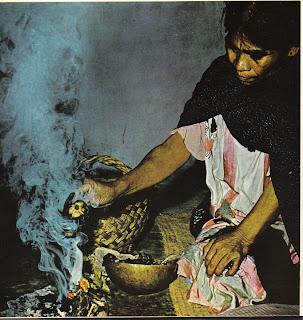 Take a look at this classic, late 1950s film footage of the hunt for clairvoyance-inducing mushrooms in the (then) remote wilds of Mexico. Remaining out of the public domain until recently when it surfaced on YouTube in 3 parts, this vintage half-hour show was aired in the US on January 4, 1961 as one of the 96 episodes of the One Step Beyond series.

This episode, “The Sacred Mushroom”, takes its name from a 1959 book by the rogue parapsychologist and US defence intelligence asset, Dr. Andrija Puharich, who conducted research into the use of Amanita muscaria mushrooms for inducing paranormal abilities in the laboratory. The film shows rare footage of Puharich accompanying the director John Newland, an Hawaiian kahuna and some academics, on a journey to the inaccessible regions of rural Oaxaca in search of the magic mushroom-using curanderos - discovered a few years earlier in 1953 by the amateur mycologist Gordon Wasson and his wife Valentina.

Puharich had met up with Gordon Wasson in 1955 and arranged for them to conduct a long distance clairvoyance/telepathy experiment between the curanderos on (Psilocybe cubensis) mushrooms in Mexico and the ‘senders’ in Puharich’s lab in the United States. The experiment never happened because Wasson and his photographer, Alan Richardson, ended up taking the mushrooms themselves, becoming the first Westerners to do so, and Richardson had a prophetic vision that apparently came true shortly after - so a different parapsychology experiment occurred.

Not having experimented with Psilocybe cubensis mushrooms himself, Puharich joined Newland in a trip to Mexico for the film sometime between 1959 and 1960, and the footage shows the mushroom shaman apparently revealing paranormal information about the medical history of one of the academics present, Dr Barbara Brown. It appears from her comments at the end of the show that Dr. Brown was certainly convinced by the experience. Amazingly, all the research team also take the mushrooms themselves (apart from Brown) and another Psilocybe shaman tells them where to find a stolen donkey, which looks rather more spurious, particularly due to Puharich’s obvious rigidity in front of the camera (check out his appalling cue card reading at the beginning of the show). In any event this fascinating film is courageous and unique, and no show since has attempted to do anything similar. I'll be giving a public talk on this at Goldsmiths Univeristy, London, on November 18th, 2008.

David Luke (with thanks to Strange Attractor for the link)

The director and host of the series, John Newland, remarked in a 1999 interview with television historian John Muir, “That was our most popular episode. It was a spooky trip. We landed in a tiny airstrip in Mexico near a mission. From there, it was a donkey trip of four days to reach the village. It was a dangerous journey, but we got phenomenal footage.”

When sponsor Alcoa (Aluminium Corporation of America) got antsy about airing the episode (even though psychedelic mushrooms were not illegal at the time) Newland suggested that he should visit a laboratory to take the mushrooms himself and prove that they were not only safe, but might enhance psychic abilities, which was what the show was trying to prove (from realityportal.info).

Great article - however it was Psilocybe mexicana they were ingesting, not Psilocybe cubensis.