Can psilocybin really cause psi? - Part 2: Wasson in Mexico 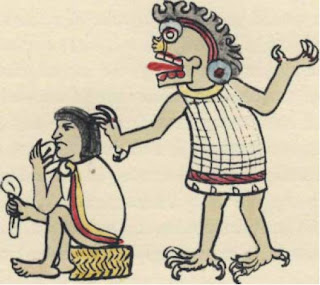 In relation to “The Sacred Mushroom” film in the last post, the Wassons’ classic and rare book “Mushrooms, Russia and History” has been made available online by the New Alexandria Archive (Vol1 & Vol2). The original two-volume book, published by Pantheon Books in 1957, was limited to 512 copies and was never reprinted, although some university libraries (such as the Bodlian, Oxford) hold copies. This digital edition was scanned from the original and hand corrected by Igor Dolgov, Zachary Jones, and Greg Golden, with thanks to a generous contributor.

Among the intriguing sections on Russian mycophilia and other beautifully illustrated fungal curiosities, this classic text notoriously describes Gordon and Valentina Wasson’s search and discovery of a sacred mushroom cult in Mexico - following a tip off from the English poet and pagan icon Robert Graves. The book describes how the Mexican shaman most often associated with Wasson and the discovery of the psychedelic Psilocybe cubensis cult, Maria Sabina, was actually encountered on R.G. Wasson’s second trip to Huautla, Oaxaca, when he was accompanied by his photographer, Alan Richardson (who had an apparently true prophetic vision when they ate the mushrooms for the first time – see previous post).

However, on his first trip in 1953 Wasson observed a divinatory mushroom ceremony being held by Don Aurulio in which this ‘bemushroomed’ indigenous shaman, to his surprise, told him two things about his son back home that even Wasson could not have known, which later turned out to be true. So even from the very first discovery of psychedelic psilocybin and psilocin-containing mushrooms in the West we have reports of paranormal phenomena (clairvoyance and /or precognition in this case), echoing the ostensibly paranormal experience (out-of-body) of Dr Albert Hofmann when he discovered/invented LSD ten years earlier (read more about this) – though I suppose this is just coincidence?

(Thanks to Thomas Roberts for the link)