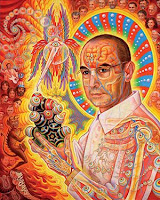 Well, I don’t think I’ve ever received as many messages about any one thing more than the death of Albert Hofmann this week, aged 102. If the response to this one man’s passing is anything to go by he has left a beautiful shining rainbow-coloured smudge in the otherwise black and white history books. The rest of us barely manage a line or two... largely without highlighting. As one friend said, the great mage is now heading for the stars. For those of you who don’t know, Albert Hofmann, a Swiss chemist, was the inventor-cum-discoverer of LSD. Much is known and has been written about Albert’s discovery in terms of its general impact on psychology, psychiatry and culture at large, but less is known about Albert’s impact on parapsychology. An article published a couple of years ago to celebrate his hundredth birthday explores his influence, both directly and indirectly, on the field of paranormal research. A tribute to Albert Hofmann on his 100th birthday: The mysterious discovery of LSD and the impact of psychedelics on parapsychology.