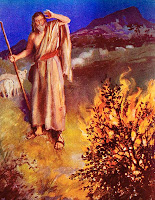 If you orbit the same bodies in cyber space as me you will definitely have come across this recent article by Prof. Benny Shanon of the Hebrew University in Jerusalem. Putting the God back in the "entheogen" (a name for psychedelic substances used sacramentally, meaning “creating the God within”) this article by the leading expert on the cognitive psychology of ayahuasca visions brings the notion of sacred psychoactive substances to the very core of Islam, Judaism and Christianity – by investigating the extraordinary visions of Moses in the Old Testament.

In “Biblical Entheogens: A Speculative Hypothesis”, which appears in the inaugural issue of Time & Mind: Journal of Archaeology, Consciousness and Culture, Prof. Shanon puts forward a highly plausible (although painfully unprovable at present) thesis that Moses was actually under the influence of a Holy Land analogue of ayahuasca (the highly visionary South American jungle decoction whose active principle is DMT), made from the Acacia tree and the Perganum harmala bush of the Sinai Peninsula. This is a fascinating article, which deserves some special attention, and will find an important home in the literature on the religious and spiritual use of psychoactive substances. Here’s the abstract and link to the full paper…

A speculative hypothesis is presented according to which the ancient Israelite religion was associated with the use of entheogens (mind-altering plants used in sacramental contexts). The hypothesis is based on a new look at texts of the Old Testament pertaining to the life of Moses. The ideas entertained here were primarily based on the fact that in the arid areas of the Sinai peninsula and Southern Israel there grow two plants containing the same psychoactive molecules found in the plants from which the powerful Amazonian hallucinogenic brew Ayahuasca is prepared. The two plants are species of Acacia tree and the bush Peganum harmala. The hypothesis is corroborated by comparative experiential-phenomenological observations, linguistic considerations, exegesis of old Jewish texts and other ancient Mideastern traditions, anthropological lore, and ethnobotanical data.

Acacias produce DMT, which is active if inhaled.