Are we being kept in the dark about the nocturnal chemistry of the pineal? 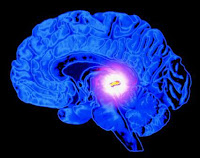 It was 50 years ago this week that news broke from Yale that they had isolated a new hormone from the pineal gland, which they did not know the function of but which lightened the shade of skin when tested in frogs. They called it “melatonin”. It wasn’t until the 1970’s that N,N-dimethyltryptamine (DMT) was found to be endogenous (made in the body) and yet, largely because DMT is a legally controlled psychoactive substance and has been seriously under-investigated as a consequence, it still remains essentially hypothetical that it also created within the pineal gland. I gave a talk a couple of nights ago about the extraordinary experiential effects of taking DMT and the possible ontology of the entities commonly encountered with this substance, be they elves, aliens, demons, gods or angels.

The talk was sold out and people were turned away (although another talk has been planned), but the people who were present, some of whom were mental health professionals, were very curious to know what research was being done into the role of DMT in mediating mental health. DMT having once been a contender for potentially explaining the occurrence of certain mental disorders I was loathe to admit that, since the 1970s, prohibition has curtailed practically all psychedelic research with humans (although the tide is now turning) and virtually no studies have been done into the position of DMT in mediating mental health. However, the recent discovery of trace amine receptors in the brain for which DMT shows greater affinity for than does serotonin – its more common neuro-amine cousin – has lead to a paper in Medical Hypotheses by Michael Jacob and David Presti speculating on the role of DMT in mediating mental health and may lead to a resurgence of interest in this simple yet extremely potent endogenous chemical. Psychiatric disorders such as depression and schizophrenia have been linked to irregular levels of trace amines.

Also appearing in Medical Hypotheses, but 20 years ago, was a proposal by Jayce Callaway that, at night, serotonin becomes converted into DMT by the pineal gland and plays a central role in activating dreams. Are we being kept in the dark about our own nocturnal chemistry? Currently, although the role of melatonin in the regulation of circadian patterns is now far more understood than it was 50 years ago, the function and even the very presence of DMT in the pineal gland remains a mystery that threatens to challenge much of what we understand about consciousness, and yet remains actively ignored as a topic of legitimate scientific research because of its taboo status. Currently there are at least two very important questions that need answering about DMT. Why should substances that activate extremely potent mystical-type experiences be naturally occurring in the human brain, and why if they are present in our own brain are they placed in the most punitive legal category for controlled substances, thereby making everybody criminals?

I assuming you are aware, of course, of The Cottonwood Research Foundation, which has been set up to explore these precise questions.