Taking the mush out of mushrooms: Forthcoming Letcher lecture 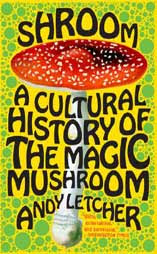 Attempting to unravel some of the mycelial-like myths and mysteries that pop up in the mush surrounding the magic mushroom, Dr Andy Letcher will be deconstructing the cultural history constructed around fungal cultures this month at the Ecology, Cosmos and Consciousness lecture series. See you all down the rabbit hole on Tuesday, 24th November at the October Gallery for a reinvigorating mycophilic gathering in true salon style.


For those who have encountered magic mushrooms, the psilocybin experience is like an ancient codex whose glyphs are at once baffling and clear. To make sense of it, each person must perform an act of translation or interpretation by which the strange is rendered familiar. But how should this be done? In the post-war period alone an original psychological framework has given way to that of mysticism, itself replaced in turn by the language of shamanism.

In this talk, Andy Letcher will encourage us to move away from the mushroom experience itself – the usual province of trip-lit –, to a consideration of how it has been interpreted throughout history. For, contrary to received wisdom, very few cultures have decoded the mushroom as we do. Along the way he will ask whether magic mushrooms bring genuine transcendence, or if the experiences they occasion forever bound by culture.

Andy Letcher is a freelance writer, academic lecturer and folk musician living in Oxford, UK. He lectures at Oxford Brookes University and Bath Spa University on subjects as diverse as neo-Paganism, shamanism, and theory in the Study of Religion. He is the author of the critically acclaimed Shroom: A Cultural History of the Magic Mushroom and Mad Thoughts on Mushrooms: Discourse and Power in the Study of Psychedelic Consciousness, published in the journal Anthropology of Consciousness. Known for his iconoclastic style, and with doctorates in both Ecology and the Study of Religion, he challenges us to question received wisdom about psychedelics and psychedelic history. A prolific song-writer, tunesmith and exponent of English Bagpipes, he fronts psych-folk band, Telling the Bees.
Posted by david luke at 09:27