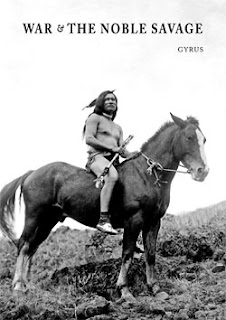 Many moderns will have you believe that urban sprawls are far safer than sparse deserts in terms of intra-species violence, and yet indigenous peoples, hunter gathers and shamanic tribes have long been held to offer wisdom on how to live harmoniously with Nature and one’s neighbours. What’s the reality of our so-called civilization in a war-torn age?

My good friend over at Dreamflesh, the writer, raconteur and cerebrally named Gyrus, is launching his new book exploring these very themes, War and the Noble Savage, and will simultaneously be pondering on the podium at the October Gallery on Tuesday 27th October, provoking us to consider our primal nature past, present and future. Please join us at the Ecology, Cosmos and Consciousness lecture series for this event and every last Tuesday of the month for wine, wit and some wanging on in true salon style.

War, Ecology and the Noble Savage – with Gyrus

Over the past couple of decades there's been a wave of revisionism, in academia and popular books, attempting to upend the hoary old idealization of the Noble Savage. From Steven Pinker's suggestion that the world today is, relatively speaking, more peaceful than it's ever been, to Steven LeBlanc's claim that no indigenous culture has ever lived sustainably, the idea that civilization itself is the source of all our ills has taken a battering.

Having just ploughed through much of the recent literature to satisfy his own curiosity, Gyrus has written a new work analyzing this recent debate, and tonight hopes to guide you through this thicket of polemics, false ideals, and dodgy statistics. Starting with a fresh look at the roots of this ideological battle in the ideas of Jean-Jacques Rousseau and Thomas Hobbes, we'll go through the behind-the-scenes stories of recent scholarship.

Is the murder rate among the !Kung, the "harmless people", really higher than that of New York? Is conservation something that only the modern world has practiced? What can we actually know about the 94% of our species' existence spent as hunter-gatherers? And will Gyrus give answers, or just ask more questions? Come along and find out...

Gyrus is an independent publisher, free range scholar, and freelance web developer. In the 1990s he edited and published the rather acclaimed journal Towards 2012, and while doing so grew pretty bored of the whole 2012 thing. He may have to u-turn on this quite soon in order to cash in. His main interests are prehistoric art and culture, altered states, occultism, and everything in-between. He recently published his first collection of essays, Archaeologies of Consciousness, and abandoned the rather acclaimed journal Dreamflesh after one issue to focus on "a book". He gets by pretty well in London.