Government finally admits to abandoning reason on the drugs issue 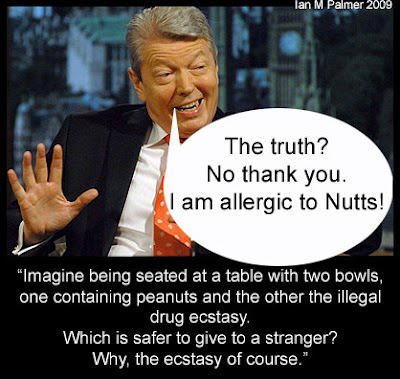 “Imagine you are seated at a table with two bowls in front of you. One contains peanuts, the other tablets of the illegal recreational drug MDMA (ecstasy). A stranger joins you, and you have to decide whether to give them a peanut or a pill. Which is safest?

You should give them ecstasy, of course. A much larger percentage of people suffer a fatal acute reaction to peanuts than to MDMA.

This, of course, is only a thought experiment; nobody would consider doing it for real. But it puts the risks associated with ecstasy in context with others we take for granted. Yes, ecstasy is dangerous and people who take it are putting their lives on the line. But the danger needs to be put in perspective”*

(*taken from a New Scientist editorial by Prof. Nutt entitled "Drugs drive politicians out of their minds")

Unfortunately, the scientist who put forward this bold but reasoned statement, based on an intense scientific analysis of the evidence for the harms associated with MDMA, was recently sacked from his Government position for stating this and similar claims. Prof. David Nutt, was forced to resign last week from his post as chairman of the Advisory Council on the Misuse of Drugs (ACMD) by the home secretary Alan Johnson, after supposedly stepping over the line as a scientific advisor by refusing to keep quiet about the truth. Accused of campaigning instead of advising by Johnson, Nutt stated that his position as an independent advisor was severely compromised because the Government wished the ACMD to support their politically-led policy regardless of the scientific evidence.

Three more scientific advisors in the ACMD today resigned following Nutt’s sacking. Read Nutt’s latest response “Government’s should get real on drugs” in the New Scientist here. Read the important Lancet paper co-published by Nutt that reviewed the perceived dangers of 20 common drugs, both legal and illegal, according to a wide panel of experts. This categorisation clearly shows that both ecstasy and LSD are considered less dangerous than alcohol, indicating the current controlled drugs classification system is a farce and a mess. Science and sense must prevail over politics and prejudice! Please join the campaign to have Prof. Nutt reinstated by signing the petition, and join one of the Facebook groups. Also check out the "Nice People" Take Drugs cards by Release.

Happy Holidays! My name is Lisa Hope and I am the assistant editor of Disorder.org. I am contacting you today in hopes of developing a strategic partnership with your website; we have seen your site and think your content is great. Disorder.org is an online gateway for people to find information regarding disorder diagnosis, symptoms, and treatment -- and is continually adding content. If you're interested in a partnership, please contact me at lisa.disorder.org@gmail.com.