A New Science of Life 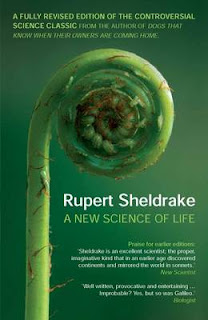 Last week saw another great evening of ranting and decanting at the Old Gloucester Street Salon, sipping wine amidst stunning artwork and listening to Paul Devereux lead us down some very tangible spiritual paths on his beautifully illustrated talk about "Shamanic Landscapes".

This month, Tuesday 31st March, at the October Gallery we have one of the greatest lateral thinking scientists of our time, Dr. Rupert Sheldrake, coming to talk to us about "Morphic Resonance and the Habits of Nature." Rupert will be giving us some fresh insights from the updated reissue of his fascinating yet shocking book "A New Science of Life", which when it was first published in the early '80s it received a review from the senior editor of the leading science journal, Nature, under the title "A book for burning?", clearly indicating an open-minded and scientifically objective reaction to new ideas.

The editor in question, John Maddox, later commented that Sheldrake was a scientific heretic as much as Galileo was a religious heretic for the pope, thereby rather absurdly condemning his own dogmatism. But Sheldrake's approach to his own rather radical ideas about the organisation of life and the location of memory is scientific and Sheldrake has been extremely vocal about trying to get scientists to test his claims, but like those who refused to look into Galileo's telescope, Sheldrake's radical hypotheses have been tested by merely a few scientists other than himself. Ex research fellow at the Royal Society, the bastion of establishment science, Rupert's most recent attempts to verify his theories have adopted a particularly parapsychological methodology and he has published numerous positive findings on his experiments into household psychic abilities such as telephone telepathy and the sense of being glared at. A definite treat.

A New Science of Life: Morphic Resssonance and the Habits of Nature

According to Rupert Sheldrake's hypothesis of formative causation, all self-organizing systems, including crystals, animals and societies contain an inherent memory, given by a process called morphic resonance from previous similar systems. All human beings draw upon a collective human memory, and in turn contribute to it. Even individual memory depends on morphic resonance rather than on physical memory traces stored within the brain. This radical hypothesis implies that the so-called laws of nature are more like habits, and evolution, like human life, depends on an interplay between habit and creativity.

great topic
friend
thx for this share
have a nice day
http://www.parapsychology3.blogspot.com/