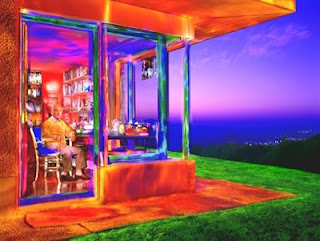 Not content with having lived to the ripe old age of 102 before he died last year, the inventor of LSD, Swiss chemist Dr. Albert Hofmann, has reportedly announced that he is still going strong in the after life. I’ve been studying the paranormal effects of psychedelics for quite some time, but this is probably the biggest claim yet to be made for the astonishing capabilities of LSD. According to an article posted on a mediumistic circle's blog, psychedelic explorer Lucius Werthmueller travelled 400km to a séance to try and communicate with Dr. Hofmann around about the time of the late chemist’s birthday. Lucias was one of the organisers of the two recent World Psychedelic Forum conferences, which attracted over 2,000 scientific psychedelic researchers, therapists and other delegates to Basel, Switzerland for the event, and he had been a friend of Dr. Hofmann for 25 years.

During the séance it appeared as though no contact was going to be made and that Werthmueller would leave empty handed but, on the contrary, after hearing two loud raps Lucias found a wax object had “somehow softly” been placed into his hand. Inspecting the object (what is known as an “apport” in psychical research) it was found to contain a thimble with a small paper note inside on which was inscribed, “Lucius, look and beware of this wonderful nature. It lives. I live. Albert.”

As can be seen from the short video of the event, Werthmueller announced his astonishment at the message and indicated that that was just the kind of thing that Albert would write. Throughout his very long life, Dr. Hofmann (as highlighted in a new bulletin devoted to psychedelics and ecology) had always been a serious lover of nature, had had a mystical experience of nature as a child, and had been quite vocal on humanity’s ecological imperatives (so certainly the information supposedly provided by Albert was not unknown to anyone who cared to represent him… I hasten to add wearing my sceptical hat). Perhaps more impressively, the text appeared to be written in Albert’s hand and was even signed with a signature closely resembling Dr.Hofmann’s own, but perhaps only an expert graphologist can comment any further on this.

Watching the video of the séance group opening the apport I was surprised at how early the opener managed to identify a thimble inside it, whilst it was still mostly obscured, but it should be said that neither was this “sitter group” unfamiliar with the appearance of such cryptic objects at their meetings, so it may have been easily identified due to its familiarity. What is clear is that fraud cannot be ruled out, nor yet proved, and the case remains a very curious anecdote. Having lived to 102, invented LSD, discovered the chemical structure of psilocybin and psilocin (the active ingredients in certain “magic mushrooms”) and invented and discovered numerous other useful chemical compounds, perhaps Albert Hofmann is now capable of some really quite astonishing feats. I wouldn’t rule it out either. One thing is for sure, Hofmann had long had an interest in the paranormal in relation to psychedelic substances.

A very similar case occurred, but perhaps one that is more convincing because of its accidental nature, shortly after the death of the psychedelic researcher Dr. Walter Pahnke. Best known for his infamous Good Friday experiment that practically proved that psychedelics do give rise to genuine, meaningful and long lasting mystical experiences, Pahnke had managed to obtain a PhD, an MD, a psychiatry residency, and a Masters in Divinity, ALL from Harvard, before dying in a scuba diving accident at the tender age of 40. Less well known, Pahnke had also attempted psychic experiments with participants on LSD but was unsuccessful.

During an LSD psychotherapy session with pioneering therapist Dr. Stan Grof, the late Pahnke’s wife had an apparent encounter with the spirit of Walter Pahnke and he told her that he had a book located in a particular place in their attic that he wished her to retrieve and give back to a friend of his. Quite amazingly, after the LSD therapy session Pahnke’s wife located the lost book, of course, and returned it to the late doctor’s friend. Somehow, as an anecdote of psychedelic spirits apparently communicating from beyond, I find this account rather more feasible than the Hofmann one (…if only he had given us the chemical formula to a new wonder drug instead of a postcard message…), but we’re only likely to find out the absolute truth when we all have our own permanent paranormal experience at the end of this life. Happy travels.

Thanks to Andreas for the link

Yeah, or perhaps not.

For several days I have been reading and looking for Hofmann’s alive!, LSD Chemist talks from beyond and is amazing and disturbing how many blogs related to generic viagra are in the web. But anyways, thanks for sharing your inputs, they are really helpful.
Have a nice day