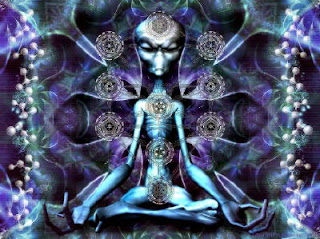 Six hundred fractal thank yous to everyone (yep, 600 folk) who made it along to Canterbury at the beginning of April for the extraordinary Ecology, Cosmos and Consciousness extravaganza, Breaking Convention. After a sleepless few days chipping away at the coalface of the new neurochemical renaissance there emerged a number of legendary quotes, cries of an epic and historic weekend, oodles of inspired blog reviews and even the odd manifesto manifesting online - all of which have been assembled here for your delight.

Attempting to bring as many of the departed Breakeros back together again, the ECC salon will now resume this Tuesday 19th April (tomorrow) at the October Gallery, Bloomsbury, London, in an effort to bridge the hyperdimensional divide between Kent's Breaking Convention and Daimonic Imagination with The Great Elf Debate, which will be led, widdershins, by Dr David Luke with help from friends. Elves, induced by DMT or otherwise, are of course a hot topic on Psychopraxis.

Please RSVP on Facebook (afraid so) so that we can anticipate numbers – Please pay on the door.

A few saucy comments and mischievous taunts and counter-taunts to get the ball rolling on the ontology of elves and then over to the good people of the floor to take the debate on a merry dance. We'll throw in some DMT, mushrooms, aliens and preying mantises into the faerie ring for good measure and then probe the audience for some thoughts on imps, piskies, gnomes, self-transforming machine elves and possible pro bono proctologists. Representatives from the Social Constructivist quad and from Tir Na Nog will be on hand to stir the pot.

Dr David Luke directs and curates the Ecology, Cosmos and Consciousness lecture series at the October Gallery, which occasionally zoops off in new and interesting co-creative directions like the Breaking Convention. He has often considered taking McKenna up on his elfin call for creating an embassy for the invisible but is really just too busy being a Senior Lecturer in Psychology at the University of Greenwich, the President of the Parapsychological Association, a Research Associate of the Beckley Foundation, a guest lecturer on the transpersonal masters at the University of Northampton, and an explorer of lost pirate utopias. He hasn't written a single book but promises to finish editing the Ecology, Cosmos and Consciousness anthology very soon.