Psychedelic human origins and the war on drugs 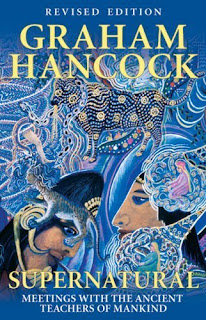 Interesting (perhaps even unbelievable) developments in US drug policy this week coincide nicely with this month's speaker at the Ecology, Cosmos and Consciousness lecture series at the October Gallery in Bloomsbury, London. Obama's newly appointed "drugs czar", Gil Kerlikowske, under the official title of Director of the White House's Office of National Drug Control Policy has this week called for an end to the fruitless and martial rhetoric of the unwinnable "War on Drugs", calling instead for a greater focus on treatment and prevention rather than incarceration.

Kerlikowske said "We are not at war with people in this country". With over a million people currently serving as "prisoners of war" (on drugs) in the US, this comes as refreshing news and could be the single greatest human rights maneuver so far this millennium. (Thanks to Prof. Thomas Roberts for the link to the New York Times article)

Auspiciously timed then, Graham Hancock's talk (Tuesday, 26th June) will transport us back in time to more psychoactively civilized and liberal millennia to speculate about the psychedelic origins of humanity.

Modern technological societies value only the alert, problem-solving state of consciousness, and have demonised trance states brought on by the consumption of psychedelic drugs. But in his book Supernatural, the background to his talk at the October Gallery, Graham Hancock presents staggering new information that experiences induced by plant hallucinogens may have played a vital role in the evolution of our species – opening our ancestors to supernatural realms and making us truly human for the first time. It all happened very recently.

Less than 50,000 years ago mankind had no art, no religion, no sophisticated symbolism, no innovative thinking. Then, in a dramatic and electrifying change, described by scientists as ‘the greatest riddle in human history’, all the skills and qualities that we value most highly in ourselves appeared already fully formed, as though bestowed on us by hidden powers. In his lecture, Graham Hancock sets out to investigate this mysterious ‘before-and-after moment’ and to discover the truth about the influences that shaped the modern human mind. His quest takes him on a journey of adventure and detection from the stunningly beautiful painted caves of prehistoric France, Spain and Italy to remote rock shelters in the mountains of South Africa where he finds a treasure trove of extraordinary Stone Age art.

He uncovers clues that lead him to travel to the depths of the Amazon rainforest to drink the powerful plant hallucinogen Ayahuasca with Indian shamans, whose paintings contain images of ‘supernatural beings’ identical to the animal-human hybrids depicted in prehistoric caves and rock shelters. And Western laboratory volunteers placed experimentally under the influence of hallucinogens such as mescaline, psilocybin and LSD also report visionary encounters with exactly the same beings. Scientists at the cutting edge of consciousness research have begun to consider the possibility that such hallucinations may be real perceptions of other ‘dimensions’.

Could it be that the human brain is not just a generator of consciousness, but also a receiver of consciousness, and could the ‘supernaturals’ first depicted in the painted caves and rock shelters be the ancient teachers of mankind? This new approach strongly suggests that human evolution is not just the ‘blind’, ‘meaningless’ process that Darwin identified, but something else, more purposive and intelligent, that we have barely even begun to understand. By criminalising and demonising the consumption of psychedelic drugs it may even be that our societies are blocking off the next vital step in the evolution of our species.

Graham Hancock is the author and coauthor of a number of best-selling investigations of historical mysteries, including Fingerprints of the Gods, Supernatural, The Sign and the Seal, Keeper of Genesis, Heaven's Mirror, The Mars Mystery, and Underworld. His books have been translated into 27 languages and have sold more than 5 million copies worldwide. www.grahamhancock.com